I have completed my first seven episodes of this podcast. I don’t know if anyone is listening but I am enjoying recording. I’m still not a fan of editing. The self-tutorials are helping but I need to work on my sound quality. So bear with me a few more episodes while I try to figure this out. I’ve reached over a 100 downloads which is a milestone for a practically unknown podcaster. That means a few people are rocking with me and at least interested in the subject matter of purpose and finding one’s alignment with it. So for the people who have taken the time to listen, I cannot thank you enough. Just hang in here with me because I have some really good content coming.

On episode 006 Purpose and Fearless Intuition with Jordana, we both share how we see numbers as signals from the universe that we need to pay attention to. There are certain series of numbers that when they pop into my awareness, I start to look for synchronicities. I also research the spiritual meaning of the numbers and symbology of what begins to appear.  Numbers have been a part of my guidance system for the last 10 years.

So it’s no surprise to me that as I approached episode 007, I debated about which guest would be the perfect end to my first cycle of episodes. Seven is a very spiritual number. Some even consider it a lucky number.  If you subscribe to the Bible, then you know that creation was complete after the sixth day and the seventh day became a day of rest. There are seven days of the week, continents, chakras and seven wonders of the world. Even the body recreates itself physically and spiritually every seven years.

7s have played a significant role in my life and in my consciousness. So as I approached episode 7, it was very important for me to recognize and celebrate the completion of my first cycle of podcasting. I decided that episode 007 Second Chances with Simla would be the perfect ending to the first cycle. Simla shares how her near-death experiences awakened her to her purpose. Simla’s story of overcoming a life-threatening brain aneurysm, leaving her corporate accounting role and starting a tour company which helps empower women in countries as widespread as Cambodia, Fiji, India, Vietnam, Mexico and Australia will prompt you to reassess the opportunities you have to help yourself and to help others and leave you with a vision of what you can change, both in yourself and the world. The perfect end to the perfect beginning. 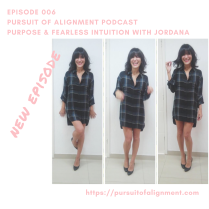 In this episode, I chat with serial entrepreneur, author, and philanthropist, Jordana Guimaraes. Jordana shares how she opted out of college and experimented with multiple jobs prior to finding her passion in public relations (PR). At 23 a decision to grab a career book in Barnes & Noble, that described every career imaginable, lead her to her passion. After reading the section on PR, she instinctively knew that’s the career she should pursue. With no experience or background in that industry, she fearlessly applied for a PR Director role at an agency. The firm like her boldness and offered her a three-month unpaid role with no training to see if she could do the job. Needless to say, after three months the firm offered her the job which she turned down in order to pursue a PR career as an entrepreneur. Jordana has spent the last 15 years, in marketing and public relations for the fashion industry. Jordana and her husband Marcelo, co-Founded FASHINNOVATION, a startup that uses technology to connect entrepreneurs and innovation to create revolutionary change in the fashion industry.

Kelli Johnson is a Spiritual Life Coach and Founder of I Am My Sister’s Keeper. Coach Kelli is not your typical coach, she uses her spiritual gifts to communicate and offer guidance from the spiritual realm. In this episode, Kelli shares how her purpose was revealed to her at 10 years old and how she spent most of her life running from that revelation. She also shares how she was unknowingly invited by a friend to a dinner for seers, mediums, and psychics. She was shocked to hear the host’s announcement that everyone in the room had that spiritual gift and she immediately thought she was in the wrong event. Kelli also explains what spiritual guides are, how to communicate with them and how they guide us toward our purpose. We also talk about how to navigate your journey if your purpose leads you to a spiritual awakening. This is a two-part episode. In part one, Coach Kelli shares her journey into finding her purpose and discovering her spiritual gifts. She also defines purpose and provides tips on how others can find theirs.

In this solo episode, Tiffanie shares her perspective on why examining your core values and beliefs should be the foundation of your pursuit of alignment with your purpose. Your beliefs will be your anchor and have an impact on the decisions you make. Those decisions impact if your journey into alignment will be zen-like or wig twisting. She shares her thoughts on spirituality, dismantling beliefs from her parents and tips on how to create your own beliefs. 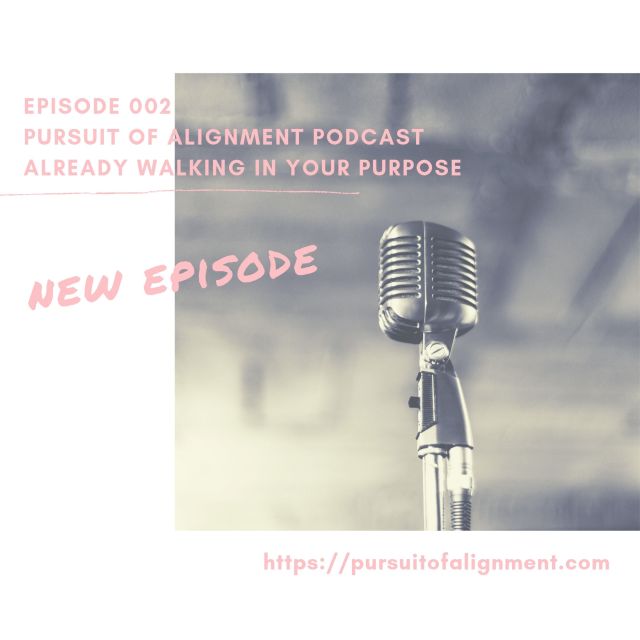 In this solo episode, Tiffanie shares her perspective on what is purpose and how one’s life purpose doesn’t always follow logic.  For most people, there is usually an overriding theme occurring in their life that is connected to their life’s purpose. Tiffanie presents the idea that most of us are already unconsciously walking in our purpose.